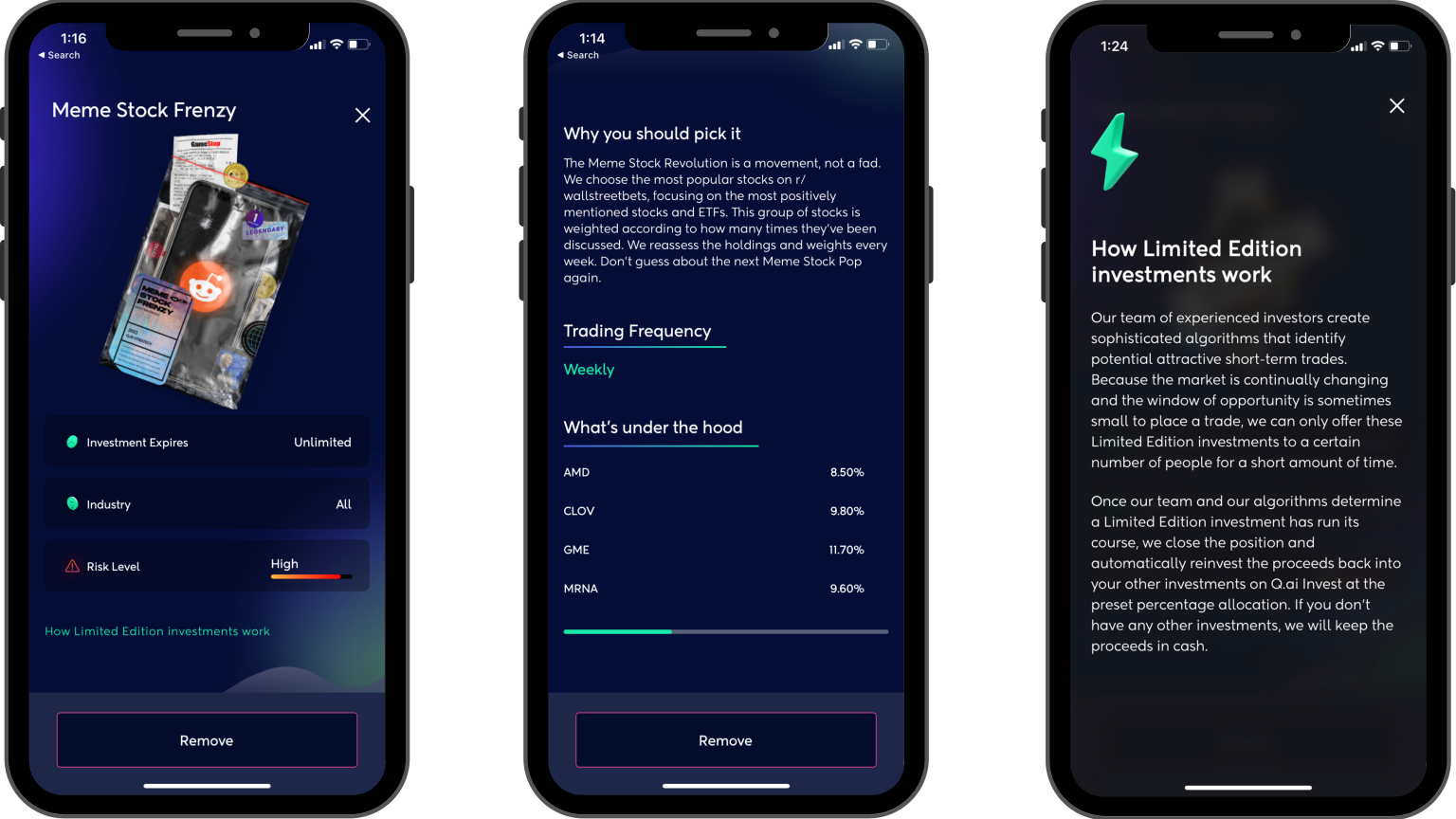 If you’ve followed the release of Q.ai’s Limited Edition Investing Kits, you know that we have something special up our sleeve. We’ve already gone back to school and welcomed consumers to the reopening economy. Now, it’s time to pivot to the trades that really excite investors. Enter: Meme Stock Frenzy. These high-reward stocks provide traders a chance to snap up massive profits – at the risk of losing it all.

Throughout August, Q.ai is releasing a total of four limited edition trading opportunities. Each free trading kit is geared toward a specific theme, such as the return to school and broader economic reopening. But this week, we’re focusing on the hot topic of the year: the meme stock craze.

What are Meme Stocks?

Meme stocks are a new phenomenon that have taken the trading world by storm. Essentially, these are securities that skyrocket in price, volume, and public interest irrespective of their underlying value. Their rising popularity is often fueled by online forums, including Reddit’s WallStreetBets community and various Twitter and TikTok accounts.

As news of the stock’s rise spreads, more investors hop aboard, which pushes prices higher – and then, inevitably, it happens. The bubble bursts, the stock crashes and burns, and hapless retail investors are stuck holding the bag.

Meme stocks reward those who jump in early and exit at the peak. Unfortunately, it’s impossible to determine when a stock’s price will crest – but once it does, it deflates practically overnight. In the meantime (or memetime, as the case may be) this new “type” of stock provides opportunistic traders with a chance to chase returns like never before.

For the lucky few, this translates to massive profits…while those who can’t exit in time become mired in losses.

The term first entered common parlance in early 2021 during the “GameStonk” short squeeze, when a group of traders from WallStreetBets “stuck it to” a hedge fund that took a short position against the stock.

Within a month, GameStop’s share price shot up from $17 to $350, before plummeting back below $45. The hedge fund that originally shorted GameStop lost billions of dollars – and a handful of retail investors made away with millions in unprecedented profits.

Since then, a number of other stocks have entered the meme stock cycle. One of the most notable is AMC, which capitalized on their newfound press time to release a new round of stock. Other big names include Wendy’s, Alibaba, and even Robinhood post-IPO.

The Risks of Meme Stock Investing

Unlike most securities, investors shouldn’t buy into meme stock trends for the long haul. Instead, think of them as the day trader’s ultimate fantasy: an artificially inflated stock just begging to crash as soon as public interest fades away. Traders who recognize the trend early and cash out at the opportune moment have a chance to walk away thousands of dollars richer.

But meme stocks by their very nature are volatile beasties.

Thanks to their instability – and lack of supporting fundamentals – they can (and do) crash anytime, often overnight. As such, the risk of loss is heightened in meme stock trends, which generate profits in cyclic peaks and valleys.

Inevitably, this cycle rewards the early and the timely: those who invest first and pull out before the stock crashes. But “early” doesn’t define most investors in a meme stock cycle. In fact, meme stocks experience the biggest gains when investors who fear missing out on the next big thing buy in – which, coincidentally, drives the stock toward its zenith. Unfortunately, that means most retail investors hop on just in time to drive up the gains of the lucky few. (But don’t pull out in time to sidestep their own eventual losses.)

So, why invest in meme stocks?

The answer, simply, is that you shouldn’t. Investing in any individual security is risky enough; meme stocks, by definition, are infinitely more volatile.

But we here at Q.ai believe the Meme Stock Revolution is a movement to be capitalized on – not a passing fad to ignore. That’s why we’ve developed a limited edition kit designed for those ready to take a walk on the wild side.

Enter Meme Stock Frenzy, a Limited Edition Investing Kit that’s decidedly not your grandma’s portfolio. Unlike the others, this one has no expiration date – though it’s just as free and easy to invest in (especially since our AI does all the work!).

But that’s where the similarities stop.

This high-risk investment strategy seeks the high rewards of meme stock trends by scraping the most popular stocks from WallStreetBets every week. By focusing on the most positively mentioned securities and weighting investments according to how often they pop up in conversation, our AI only picks the securities that have the best chance of generating returns. Then, we reassess our holdings and weights weekly to get out while the getting’s good – and buy the next big thing before it gets there.

So, What’s Under the Hood?

Historically, trades might have included AMC, GameStop, and more recently, Robinhood. But those trends have already popped – so what’s next?

That’s the beauty (and risk) of Meme Stock Frenzy: no one knows.

You don’t know, we don’t know – and until our AI trawls the depths of WallStreetBets every week, it won’t know, either. That’s the joy of meme stocks. When they pop, they pop hard, before falling into oblivion and namelessness.

If you want to take a ride on the wild side, hop aboard the Meme Stock Frenzy – before the train leaves the station.

Q.ai offers advisory services through Quantalytics Investment Advisors, LLC ("QIA"), a Registered Investment Adviser. This is solely for informational purposes. Advisory services are only offered to clients or prospective clients of QIA . Past performance is no guarantee of future returns. Investing involves risk and possible loss of principal capital. Comments by viewers or third-party rankings and recognitions are no guarantee of future investment outcomes and do not ensure that a client or prospective client will experience a higher level of performance or results. Adviser has reasonable belief that the content posted by a Third Party does not contain untrue statements of material fact or misleading information regarding its advisory services.

Our AI manages your money with commission-free, institutional-grade, AI-powered investment kits.
Sign up for Q.ai

What Are the Different Types of Investment Strategies?

What Are Investment Strategies Made for Beginners?

What Are International Investments?